At the delightfully avant garde opening sequences of Manchester International Festival’s Tree of Codes I felt a little cheated.

In 2012 I had run around Arthur’s Seat in a lightsuit – and not once, since a practice session was necessary to the choreography (Speed of Light, Edinburgh Festival). I then emailed the innovators behind that performance hoping to borrow a suit to map one of the expressive dimensions of natural sign language poetry performance (Signart). Sadly my request fell on stony ground.

It was at least heartening to see such suits well deployed by the Paris Opera Ballet and Company Wayne McGregor.

The next sequence, involving angled mirrors, had me wishing all my deaf and sign sensitive friends were in the stalls alongside me (and no, that number does not include Mr. Tumble, unless his purpose is to offer umbrellas at the farthest reaches of the foyer).

And then sorcery gave way to beauty – the chromatography and chroma-graphics; Jamie xx’s formational soundscapes; refractions of reflection upon reflection; layered dimensionality….

Yet the real 3D human bodies remained somehow trapped – if not in dimension, then in plane – and, indeed, in only the lower reaches of the vertical (as if footnote or subtitle).

Despite the virtuosity and funk of dancers and choreographer Wayne McGregor, towards the culmination of the revolving circular windows one longed for some lift – perhaps by such choreographic stage management as vertically revolving panes lifting individual dancers to an exit amongst the higher boughs.

Or for some underscoring of depth. This latter, in particular, could have liberated the embodied text by occasioning the dancer to emerge from those unreachable parallel dimensions, through the coupéd scenery and out toward or even into the auditorium in which we featured. Foer’s book made such manoeuvres possible for the word.

Small frustrations not withstanding, I was not disappointed to have made the pilgrimage for such a gem, and left dreaming of chats with Olafur Eliasson. 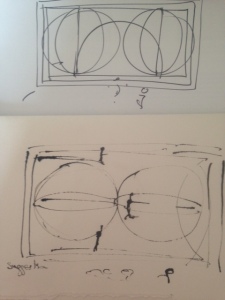 I recently popped into Bristol’s Arnolfini to immerse myself in the brilliant Table of Contents: ‘a durational movement installation co-created by Siobhan Davies, Andrea Buckley, Helka Kaski, Rachel Krische, and Matthias Sperling, each using their own history as a choreographer and performer to question how dance is archived.’

This was a wonderful series of pieces performed interactively with the public; each dancer taking it in turns to lead or direct a work. Amongst these glittering gems a very simple piece caught my imagination.

The dancers each invited a member of the audience to work in partnership with them. Each dancer then laid down on the floor. Their partner simply had to instruct their dancer to stand up, movement by movement. The dancers were very reasonable, but very disciplined in following their instructions precisely.

The difficulty of this simple task quickly became clear, with dancers contorted into all sorts of unsustainable shapes.

The piece succinctly demonstrated the limits of spoken language, of logos.

Yet I couldn’t help musing that if the partners had been able to give instruction through any natural sign language, the task would have been achieved quickly and efficiently.

Australian scholar Dorothea Cogill-Koez has argued that the elements of sign languages known as ‘classifier predicates’ are remarkably similar to ‘typical systems of visual representation’, such that sign languages use ‘two equally important channels for conveying explicit propositional information, the linguistic and the visual’. Although I disagree with some of the further detail of her argument, that sign languages do not always have to rely on the linguistic to communicate information was a premise of my own doctoral study.

Because sign languages can visually represent the physical acts involved in standing up, the communication would have been conveyed much more easily, the dancers spared their agonies.

But more than that sign languages are languages that are inscribed through the body; they are body-conscious languages operating through, around and in relation to the body. Sign language helps me to locate emotions and sensations in my body, to read them in others, and it provides a physically-centred orientation in the world. What was so striking about the struggling speakers at the Arnolfini was how very dis-embodied their speech was.

So why did we ever adopt it as a form of communication? What were the evolutionary advantages to the urge to speak?

Although deaf people are often very noisy signing can be a remarkably quiet form of communication (good for hunting), and is much more efficient across distance. It is very useful in noisy environments, too. The only advantage speech offers, as far as I can see, is that it can be used in the dark (although in one’s humble opinion using sign to communicate on the body of another in intimate situations is far preferable).

So did humans find a sudden need to hunt only at night? When did all the lights go out?

Isn’t it time we switched them back on so we could all see each other more clearly?

WITHIN ARE PIECES OF ME

A blog full of humorous and poignant observations.

Global issues, travel, photography & fashion. Drifting across the globe; the world is my oyster, my oyster through a lens.

Things made by Becca Rose